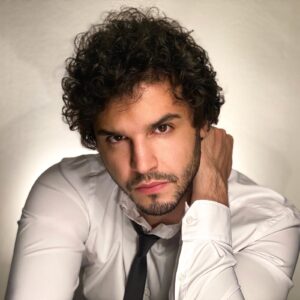 Lauded as “one of the greatest cellists of his generation” by acclaimed pianist Fazil Say, and with an “enviable technique and a rich broad palette” by Classical Music Magazine, Jamal Aliyev is captivating audiences all over the world and rapidly rising to the top of his profession. Being in high demand, he has made numerous appearances in North and South America, to the Far East in China, Hong Kong and Singapore and all throughout Europe.

In 2017, he made his solo debut at the prestigious BBC Proms with the BBC Concert Orchestra at the Royal Albert Hall performing for the celebrated film music composer John Williams’ 85th Birthday. In the same year he won the ‘Arts Club – Sir Karl Jenkins Music Award’ and released his debut CD, ‘Russian Masters’, with pianist Anna Fedorova for Champs Hill Records to wide critical acclaim.
During the 2021/22 season Jamal toured with Sir Karl Jenkins and the London Concert Orchestra in the Royal Festival Hall (London), St. David’s (Cardiff), CBSO Center (Birmingham), Bridgewater Hall (Manchester) and the Royal Concert Hall (Nottingham).
Jamal Aliyev gave the Turkish premiere of Fazil Say’s cello concerto ‘Shahmaran’ at the Volkswagen Arena – Istanbul, in December and will be touring together as a duo in 2022-23.

Jamal has performed extensively internationally, highlights including solo appearances with the BBC Scottish Symphony Orchestra (broadcast by Radio 3), the Philharmonia Orchestra at the Royal Festival Hall, the Russian National Orchestra at the Grand Hall of Moscow Conservatory, Presidential Symphony Orchestra in Turkey, CBSO at the Royal Albert Hall, Simón Bolívar Symphony Orchestra in Venezuela and Tomsk Philharmonia at the Trans-Siberian Festival. In 2021 he was featured as one of Classic FM’s ‘30 of the most brilliant young classical musicians playing today’.
“His extremely successful Hong Kong debut in 2022 was “jaw-dropping” and left audiences “dazzled” for both his solo recital for Premiere Performances and his appearance with the Hong Kong Sinfonietta.”

This season Jamal Aliyev debuts in Hong Kong, Australia and the USA, records albums with Turkish pianist and composer Fazil Say and the Vienna Radio Symphony Orchestra conducted by Howard Griffiths. In September of the 2022/23 season, he will be releasing his duo album ‘Tree of Life’ with Fazil Say as well as recording Say’s ‘Shahmaran’ concerto with the Deutsche Symphony Orchestra in Berlin later in the same season.

Immensely popular in Turkey, he returns to give recitals with Say, and to perform concertos by Haydn and Shostakovich with the Istanbul, Izmir, Bursa, CSO, Eskisehir and Mersin Symphony Orchestras. Furthermore, collaborating with local musicians using traditional Turkish instruments is something that Jamal believes in very strongly and relishes doing. He has promoted this through the online release of traditional folk and classical music performances.